I’ll start by being honest and admitting that I have some of the shortest and straightest lashes known to man. This makes it a bit of a struggle when it comes to finding a mascara that works for me, and often I resort to falsies instead. However, I have managed to find three that work well from a high, middle and low end brand.

I’ll start with the cheap and cheerful Miss Sporty Fabulous Lash in Extra Black. Believe it or not this is only £1.99 which is the quarter of the price of the average mascara! I really love this mascara as it’s very lengthening and it has a wispy effect. It can make lashes look quite thin so if you prefer thicker lashes then you can easily put a thickening mascara over the top.

Maybelline Lash Sensation mascara in a long time fave of mine.  It costs a little more at £8.99 but it does everything I need it to. It lengthens, curls and thickens and an extra coat can easily be added for extra definition. It is a little more expensive but I think it’s worth it because you don’t need to worry about applying other mascaras over the top. 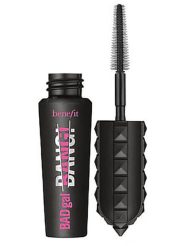 Finally, the popular Bad Gal Bang from Benefit makes the list. It’s known for its thickening and voluminous effect. It certainly works. No other mascara has ever given me such full looking lashes. I have to admit that it can look a little clumpy so I prefer putting on a lengthening mascara first (usually Miss Sporty’s above or Benefit’s ‘They’re Real’). The full sized version is around £18 but I have the mini version for £8.99 and it’s lasted me half a year and I use it nearly every day because you don’t need much product.

One thought on “Mascara, Mascara and More Mascara”